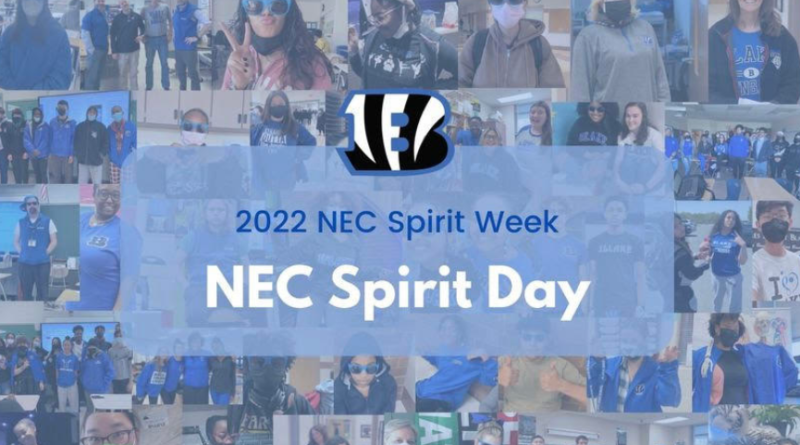 If NEC Spirit Week proved anything, it’s that if there’s one Blake has, it’s school pride!

The week of April 25-29th had the Bengals of Blake participating in the second annual Northeast Consortium (NEC) Spirit Week! In competition with fellow NEC sister schools, Springbrook and Paint Branch, Blake competed to send in the most pictures of our student body decked out in spirit wear.

Kicking of the week with Culture Day, we got to see the diversity of our Bengals’ cultures through their clothing. Extreme Weather Day allowed us to see how the Blake community tackles the terrors of the ever-changing Maryland atmosphere; Outfits ranged from donning sunny shades to hunking on bulky winter coats. Wednesday was Character vs. Celeb Day, and Blake proved that we do not disappoint in the creativity category; We saw costumes of all kinds, from beloved cartoon characters to commercial icons. Thursday took us to a blast to the … future?! Back to the Future Day allowed us to get a glimpse into our student body’s aspirations for life after they depart Blake, and had participants dress in attire related to their future career. Finally, the week closed with NEC Day, where students displayed their school spirit by wearing their respective school colors. One thing about Blake, the student body is going to wear its merchandise. Blake also rallied in support of the Friendly Gardens Complex through participating in the Penny War, where we raised over a thousand dollars in aid! If you want my personal ranking: NEC Day=Culture Day>Character Day>Back to the Future Day>Extreme Weather Day.

Of course, none of this would be possible without the work of our very own diligent and preserving SGA, as well as Paint Branch and Springbrook’s respective SGAs. It takes a lot of work to pull-off such a widespread event, so to get an inside look behind the scenes of the whole ordeal, I interviewed Junior Quynhan Nguyen, Blake SGA’s Vice President.

This was the second annual NEC Spirit Week. The event was formed by the 2020-2021 SGA officers of the NEC, but Nguyen reveals that Holly Tran, current President of Paint Branch’s SGA, originally brought the idea to the table.  “Lots of planning went into this,” says Nguyen. “Originally, [SGA] wanted to host [NEC Spirir Week] during the fall, but things kept pushing it back so it ended up in April, which isn’t so bad as it was nice having an end-of-year event to boost morale,” divulges Nguyen.

Between the three NEC schools, they figured out how to count the tallies, keep scores, and ensure that everyone played fair between a population of roughly 5,700 students. And that’s just students, not counting the staff from the schools! “The officers and advisors of all three SGAs met at least once a week for several weeks prior to the commencement of the event. We had to plan what Spirit themes we wanted to have that would be fun enough for students, but not too fun for admin,” comments Nguyen. The NEC SGA had a lot on their plate, but did not let that deter them in cultivating a well-planned celebration.

Additionally, the combined SGAs did not just have to plan the Spirit Week and days itself, but also the advertisements for the NEC Spirit Week in order to garner student attention. “[The NEC SGA] also had to plan how we were going to advertise this event to nearly 6,000 students and staff of the NEC. We decided to design posters that would be published on the SGAs’ Instagrams and around the school hallways, but most notably we filmed promotion skits/videos for each Spirit Day, which was one of the most fun parts of planning,” Nguyen reflects. It’s evident how much work the combined forces of our very own NEC put into planning such a successful event.

Nguyen also reveals that SGA tried really hard to get approval of the ever-elusive “Anything but a Backpack Day,” but alas, we can’t all get what we want. “It is not coming and [SGA] are just as sad as you,” assures Nguyen.

All in all, all the NEC’s arduous labor paid off and cultivated an amazingly successful and enjoyable spirit week. “It was so exciting seeing everyone participate! It made [me] feel like we were really part of a strong community! Go Bengals!” Nguyen excitedly states. “It really proved how strong the Blake community is! Seeing all kinds of students AND staff participate was so … heartwarming. Ew. Not to get sentimental, but I love this school,” Nguyen remarks warmly.

Nguyen feels as though Blake’s sense of community has strengthened due to our combined efforts during Spirit Week, which is something we needed desperately. The pandemic really took a hit to our school spirit. “And more specifically to Blake, in my personal opinion, I feel like we are not as strong-spirited compared to other schools. So it is important to have events like these throughout the school year to boost morale and connect us stronger! Blake has such unique and diverse demographics and it is important to make sure all of us have a strong community together,” reinforces Nguyen. Blake coming together to win first place really made the student body more unified, and bonded us in a way that we could not have imagined.

Blake’s SGA is incredibly grateful for all the participants. “ The SGA truly appreciates every single student and staff that participated, even if it was just for one day out of the week. And for those that didn’t, that’s okay! We just hope that you join us for our future Spirit Weeks. We will work hard to plan even better ones that can get more participation,” says Nguyen.

Give me a B! Give me an L! Give me an A! Give me a K! Give me an E! What does that spell? Blake! Our spirit really shined through during NEC Spirit Week, and it’s up to us to keep the momentum going. After all, “this won’t be [Blake’s] last Spirit Week,”  assures Nguyen. 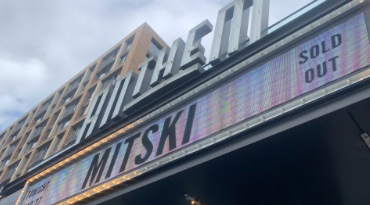 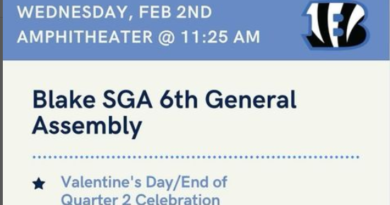 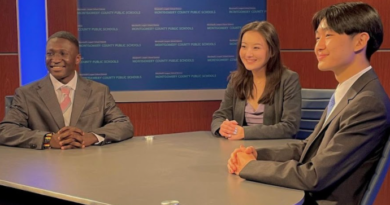