Congratulations to the Boys and Girls indoor track teams for another great year. Both teams competed in the regional tournament and had exceptional performances. The girls team finished in 11th place but had some great individual efforts.

After losing many four-year varsity runners to graduation the year prior, there was much speculation if track could continue its high level of success.

Another notable performance from the girls was Freshman Alyssa’s Forresters 2:39.28 finish in the Girls 800-meter run, where she finished in 11th place.

For the Boys, they finished in 12th place with impressive solo feats of their own. The team was led by Junior, Mason Minus, who placed fifth in the 800-meter run, with a time of 2:04:47.

Both the Boys and Girls teams had State Qualifiers for their respective events. From the girls, Serena Harrison qualified for the 55-meter dash and the 300-meter dash. For the boys, Mason Minus qualified for the 800-meter dash. Both had solid performances in their State Championship Events as they represented Blake proudly. We expect more future success as the outdoor season is on the horizon. 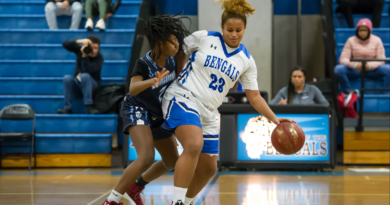