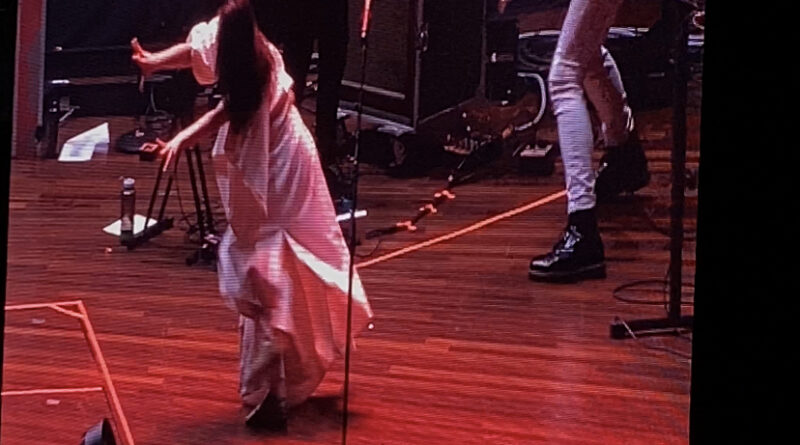 The gray skies and wet grass weren’t enough to hold back tens of thousands of fans from gathering for the All Things Go Festival on the first day of October. The festival line-up included headliners like Lorde, Mitski, and Bleachers.

Dedicated fans gathered at early hours of the humid morning to queue for the general admission pit to get front row for the show, while others took their time and arrived just before the main acts got on. Openers Kyle Dion and THE BLSSM kicked off the show at noon. The size of the crowd continued to grow until Lorde closed out the festival around midnight. In any case, the energy was buzzing all day long regardless of who was performing.

Smaller artists like Maude Latour, Goth Babe, Peach Pit, Hippo Campus, and more, got fans pumped up and ready for the main acts. Even if people didn’t know the artists’ lyrics as well, their collective stage presence was enough to boost the energy in the crowd.

Indie-folk singer-songwriter Faye Webster wasn’t slated as a headliner, but the way that almost everyone in the 20,000 person crowd sang along to her lyrics made it seem otherwise. “[Her] feelings of isolation and loneliness communicated through her lyricism,” says Kamali Jangha, an avid listener of Faye Webster, was well expressed during her 50-minute performance.

While fans were waiting in the middle of sets or walking between Merriweather’s main Pavillion stage to the more intimate Chrysalis stage, they got to enjoy the scenery of the beautiful Symphony Woods or grab some food at one of the several concession stands. If anyone ever has the opportunity to see a performance at Merriweather Post Pavillion, trying the onion rings is a must. Fried in a crispy and light beer batter with the softest onion rings and a decadent spicy mayo sauce. They are quite literally the best onion rings I have ever had and I thought about them for days following the music festival.

When it finally came time for the main acts, Lorde and Mitski, to get on stage, it made the hours and hours of waiting in the bitter weather all worth it. Blake alum, Sofia Norberte, says, “I would not be the person I am today without Lorde or Mitski, take that as you will.”

Mitski’s musical storytelling with her signature style of interpretive dance proved to be unlike any other artist you would see on stage in this day and age. Her lyricism perfectly encapsulates all the gut wrenching feelings associated with love that most listeners could relate to. Lorde’s performances of songs from her first two albums, Pure Heroine and Melodrama, brings the audience back to their childhoods filled with angst and carelessness. But, while singing tracks from her latest album, Solar Power, she introduced a new feeling of content and happiness that comes from maturing and holding no more grudges (pun intended).

The event was perfectly executed with the lineup of some of the best indie pop artists and embodied such a welcoming atmosphere. It’s no wonder that the festival is a DMV favorite and only grows bigger each year. At the All Things Go festival, fans walked out with what they expected and even more.