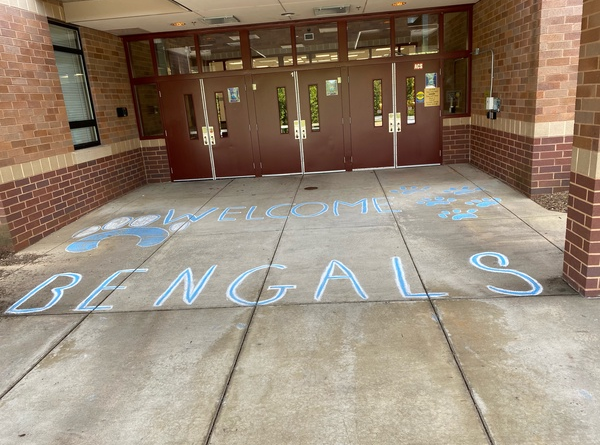 The annual new student orientation took place on Aug 26, introducing our incoming sophomores and freshmen to the school for the first time. Even Principal Bob Sinclair knows this has been one heck of a year, and the difficult transition has left people with many questions. Have the freshmen gained maturity or are they stuck in the seventh grade? Do our seniors feel worthy of their new title and superiority? The orientation set the stage for this crazy new school year. Upperclassman volunteers and new students alike participated in the event. Let’s find out what they are thinking.

“I am very nervous about high school, but I am very excited as well. I feel like doing all of the 8th grade online has helped me mature and grow,” says freshman Charlotte Weikert. “I decided to go to Blake because I am familiar with the school since my sisters went to Blake and they enjoyed it.” Weikert felt that the volunteers and teachers were all very friendly, with many recognizing her because of her sisters. She notes that it is slightly annoying to be compared to her sisters, but feels lucky that she has never been confused with them.

“Since last year was completely different, it feels a little like [freshman year] didn’t count in a way,” says sophomore Ian Fuqua. “Obviously, I still learned things, but when I think of high school I don’t think of a computer. So, it feels sort of like we skimmed over 9th grade and went straight into 10th. It doesn’t feel like I actually went through freshman year.”

“It wasn’t my first time seeing the school, but I wouldn’t say I feel like a freshman, just a really lost sophomore,” says sophomore Namara Mugamba.

“I was surprised how energetic and excited a lot of the students were about starting school,” says junior and student ambassador Nate Lara. “The school layout came back pretty easily to me too, after having only been there for a little over a semester.” Lara notes that he feels very nervous about going straight into junior year after how much easier the past two virtual years have been.

Junior Mackenzie Taylor participated in the show for the new students as a part of the color guard team. She enjoyed their presentation and hopes no one noticed her mess up a “million” times. While readers should note that she is an incredible dancer, Taylor remained in the back for a reason.

All those in the auxiliary gym can confirm just how hot it was in there. Nervous freshman and sophomores nervously approached the overly eager members of the school’s many clubs. While the energy may have been a bit much for some, the school is hopeful that the new students enjoyed their time there.

“I’m kind of nervous since most of my friends are going to different schools and Blake seems so big. I’m excited to start ninth grade though and I’m excited to be back in regular school,” says freshman Nanette Wyatt. “I’m planning on joining Allies 4 Equality and the school play. I wanted to join [Blake Stage Company] since I like theater and [A4E] because I’m bisexual and it seemed like a cool safe space.”

Although Senior Deena Habash did not originally plan on attending the orientation she created an impromptu stand for Model United Nations. As the president, she felt that was the least she could do for the club. Those in attendance may vaguely recall Habash screaming “JOIN MODEL UN” at the top of her lungs, and giving mortified students a monologue about the club’s positive attributes. Whether or not it was effective remains unknown.

Taylor also helped advertise Key Club and got to meet a lot of new students. She remembered when she was a little freshman and hopes they won’t be afraid to ask her for help. “Just don’t ask me where your classes are because I really don’t know the hallway system either,” she says.

“I think it’s going to be a great school year,” says Mugamba. While no one can predict how the school year will turn out, it will certainly be one for the ages… assuming everyone is not sent back in two weeks due to a COVID-19 outbreak. But hey, who knows. 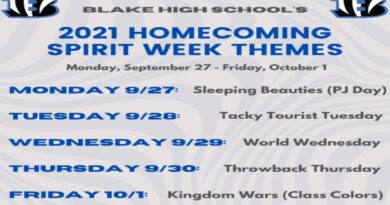