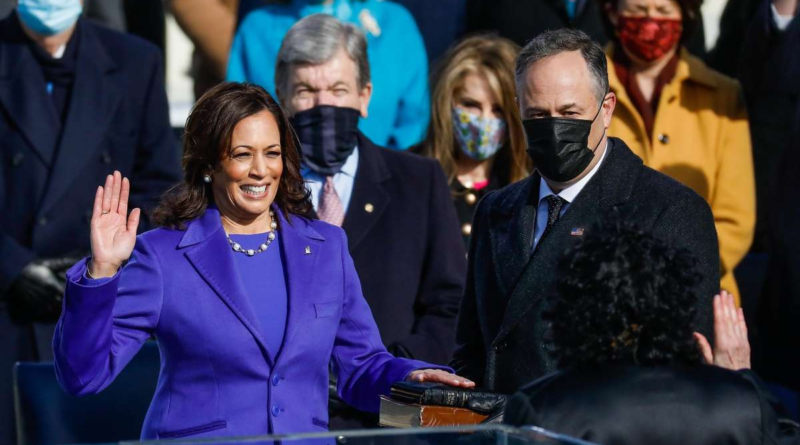 In the year 1789, a middle-aged white man from a city in Massachusetts took office as the first Vice President of the United States. Since that day, every American to hold that office has been a white male. Until yesterday.

Wednesday, January 20th, 2021, Kamala Devi Harris, a former US Senator and state Attorney General from California, was sworn into the office of Vice President. She is the first female, the first Black woman, and the first person of South Asian descent to hold this office. Additionally, Harris was sworn in by the very first Hispanic and Latina woman to serve on the United States Supreme Court, Associate Justice Sonia Sotomayor. She is now the highest-ranking woman in the nation and the tie-breaking vote that Democrats may need in the US Senate.

When asked how she felt about the new diversity within our government, Blake senior Joy Frimpong, said, “It’s time for a new America. We’re no longer under the MAGA presidency, we’re under a Biden presidency, a Harris presidency.” Frimpong expressed a need for change. Her perspective was clear: it’s a new dawn for the American people. It’s time for healing, representation, and social awareness after a very stagnant four years. Additionally, when asked what she would like to see in this new America, Frimpong took a moment to think before responding, “I’d like to see more reforms concerning police brutality and their interactions with the black population. And defunding, for sure, pouring that money into prison reform programs. Just making sure that all citizens deserve and enjoy the same legal protections.”

One of her main policy issues was mass incarceration. For others, it was police reform, climate change, the military-industrial complex, COVID-19, etc. Many members of our student body have developed political concerns upon entering high school. And for a majority of us, our established opinions have never existed outside of a Trump presidency. Our social awareness began in his term, and our unheard pleas for reform took place throughout it. Frankly, it’s almost strange seeing someone new in his place and it’s difficult grappling with the possibilities that come with this new era.

Regardless, Frimpong was overjoyed when I brought up Kamala’s presence in our politics. In response to my asking how she felt about having a woman of color as her vice president, she said, “I feel as though it’s far overdue. But at the same time, minorities who dwell here will slowly be placed in positions of power. She’s kind of a catalyst of hope for minority students like myself. And before her we found ourselves irrelevant when imagining political scenarios.”

For Frimpong, Harris’ position is a ray of hope. It was the first step to a more diverse government. Similarly, when I asked another student, Abigail Aronne, how she felt having Harris as VP, her response was just as exuberant. Aronne’s smile could be felt through the screen as she rejoiced. “I feel great. This makes me so happy, because it is progress. The fact that she’s a female and she’s a person of color is so cool, and it makes me so excited,” she told me. When I asked how she felt about this new presidency as a whole, her feelings were similar. “It makes me feel a lot more relieved to know we’re going to have a different administration. I know it’s not going to be perfect. I know there’s still stuff we have to work through and fight for, but I can finally breathe a slight sigh of relief,” Aronne said.

For women, this is a moment to celebrate. It highlights what we too can become. The impacts of her new office can be felt all across the nation, even within young black men. When interviewing the current President of our Student Government Association, Mason Minus, I asked him the same question. How do you feel having Harris in office? He paused for a moment, then, “It’s awesome. Personally, I think that it’s about time that we had a woman in an office such as the vice president. I’m just so proud to have someone who looks like me, and who resembles other races too in that office. She’s a woman of color. That is the Vice President of the United States.” His response was lined with deep respect as he later added, “I’m really proud to be in a nation that has a person like that in office.”

Harris has inspired every part of America, young men and young women alike. And as important as it is to hold our politicians accountable, it is also fundamental that we celebrate their identities. Kamala Harris being sworn in does not instantly rectify the issues regarding race in the United States; however, her presence in that office has also proved to many minority students that they can be represented in American politics. Harris’ position is a statement. It’s not impossible for a double minority to hold office. It never has been.

She has paved the way for the future of our government. A barrier that once stood in the paths of women all across the country has finally been lifted as she steps into her role as President of the United States Senate. Diverse communities all across America finally have an elected official who looks a little like them, and although it’s long overdue, it’s still something worth celebrating.