Aiming to have a positive impact on a larger number of students and educators,  Foundations of Technology teacher Bart Popeck has set out to earn his master’s degree in administration and supervision.

Mr. Popeck has been a teacher for 21 years: the first 12 at the middle school level and the last nine in high school.  Mr. Popeck expressed he was content with teaching in the classroom for a while, but noticed his long-term goals changing five years ago.

“I [want] to have a different type of impact on the students and on the school,” Mr. Popeck says. “It boils down to making things better for the students [and] getting better quality teachers in front of them every day.”

Another motivation for earning this degree was the promise of working with and inspiring new teachers.

“It’s so hard [because] they don’t have enough support and they’re overwhelmed,” Mr. Popeck says. “These are some of the teachers… that connect the best with students [because] they’re younger and more energetic, and they [make] great connections.”

Two years ago, Mr. Popeck enrolled in a program run by Hood College and Montgomery County Public Schools. Over the course of three years, Mr. Popeck has undergone a series of tasks leading up to the administration degree. These tasks include night classes, teacher mentoring, principal shadows, a principal’s exam, and the piloting of a research project. Mr. Popeck is in the final year of the program.

Principal Bob Sinclair, whom Mr. Popeck shadowed, says that he thinks Mr. Popeck would make a great administrator. He says,“[Mr. Popeck] really wants to do well for kids. He wants to make a difference.”

Fellow Foundations of Technology teacher Deshawn Anderson expresses his appreciation for Mr. Popeck’s mentorship. Mr. Anderson says, “It’s been something that he’s been doing with me since I [started] here and he’s been really helpful in a lot of ways…it’s been pretty fun.”

Mr. Popeck predicts that he will start his administrative journey at the middle school level. “Any time I see myself in the role, I keep going back to middle [school],” he says. “It’s such a formative age… if they were a car you could still mold the frame.”

As he will not be eligible for the administrator’s applicant pool until this summer, Mr. Popeck expects to be at Blake for another year of teaching technology education.

He reflects on his time as a classroom teacher. “I did the best I could in the classroom and I tried to reach [students] personally [and] go beyond…the role of teacher,” he says. 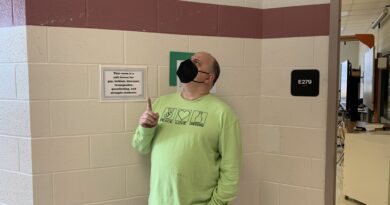 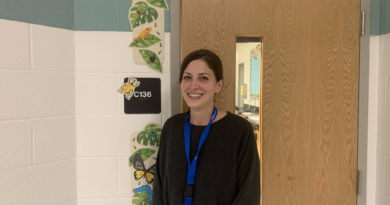