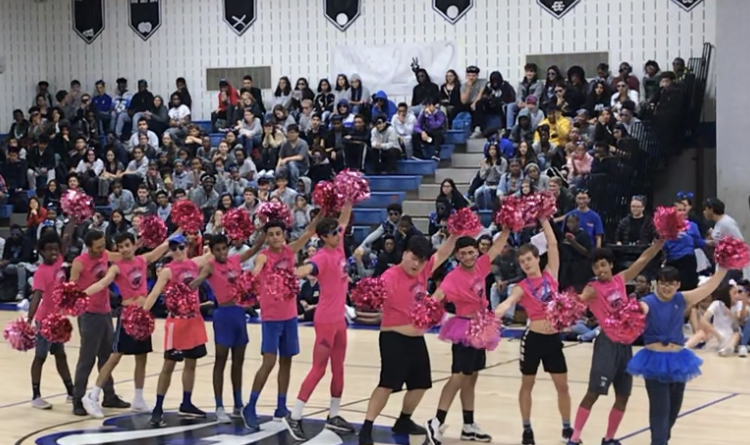 Friday, Nov 1, administration decided to hold two pep rallies instead of one in response to adverse weather conditions, garnering mixed feelings from students and teachers.

Homecoming King senior Owen Zeigler offers his reaction to his win not being announced in front of everyone. “I was kind of surprised because I didn’t think the conditions were that bad outside,” Zeigler says. “But … I don’t really care too much about that. All that mattered was that people who went to the dance had a good time and [schoolwide recognition would have been] just another added bonus.”

Homecoming Queen senior India Smith says she did not care for the pep rally being moved indoors but expresses her gratitude for having won her new title. “I felt like we should have gone outside,” Smith says. “No one was really engaged in performances and there weren’t a lot of games, so I really didn’t like it, [but] I’m just glad I got crowned.”

The schedule alteration combined with those select students’ absences meant that some students missed instructional or study hall time that they would not have missed had the original schedule been in effect.

Clarinet player sophomore Graham Ferguson says that he was comfortable with missing a class for his marching band performance, though, and says most of his bandmates felt the same way. “I was up to date, so I didn’t miss much,” Ferguson says. “As far as I know, everyone was happy.”

Ferguson also expresses that he understands the rationale behind moving the pep rally to the gym but notes that it would have been much easier to perform outside. “We have a lot more space on the field, so it would have been better space-wise outside,” he adds.

Like Ferguson, Mr. Rowell understands the impetus behind shifting the pep rally indoors, but thinks the fact that the decision had to be made was unfortunate. “I think ultimately a pep rally is at its best when the entire school is together and splitting it is not ideal,” he says.

Others, like Social Studies teacher Chris Danis, did not understand why the pep rally had to be moved indoors. “It [was] dry enough, it [was] warm enough, it [was] a beautiful day,” he states.

Various explanations circulated Friday afternoon as to why the pep rally was moved indoors when the weather seemed to be cooperating, but administration says they moved the schedule around because of the football field’s conditions due to rain the previous night as well as the temperature outdoors.

Assistant Principal Norman Edwards says, “Administration did not want to change the schedule because it presented some logistical issues, but we have to look out for student safety first.”

Administration does not have other poor-weather contingency plans for pep rallies at this time because the stadium is the only place that can host the entire student body.