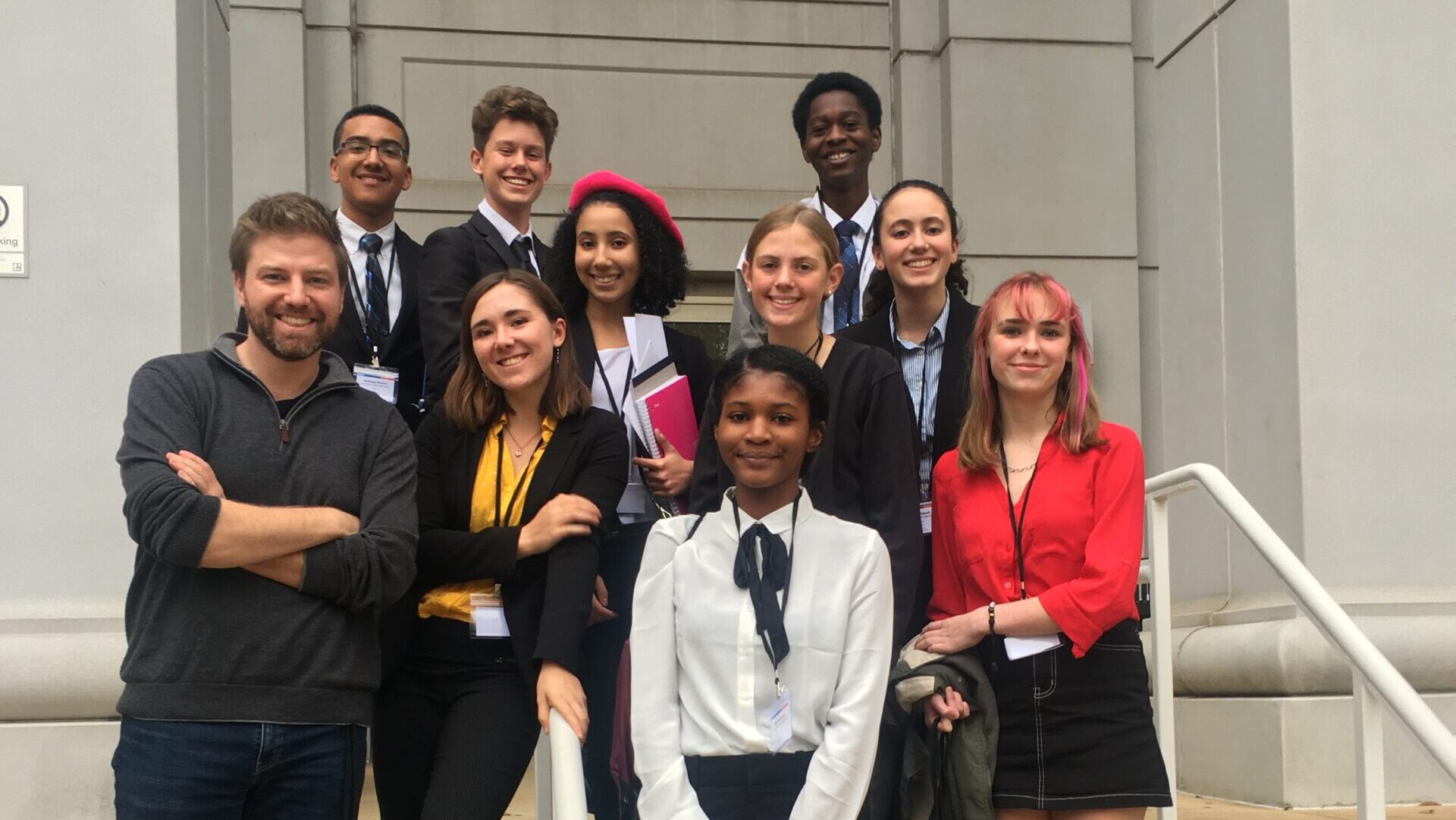 The Foreign Service is the term used to describe the body of men and women who carry out the United States’ diplomatic missions around the world. Their chief purpose is to foster a global atmosphere of peace and prosperity, while putting an emphasis on Americans’ protection and the advancement of US interests abroad. Joining the Foreign Service was the perfect career move for Mr. Rowell—someone who teaches about the world and its history, runs a club dedicated to diplomacy and speaks multiple languages.

At a young age, Mr. Rowell fell in love with the idea of becoming a global citizen. “I’ve been interested in diplomacy since I was in high school,” Mr. Rowell says. “I was in Model UN and have been taking every opportunity to travel overseas and learn more about different cultures.”

Mr. Rowell’s innate curiosity for the world around him was also nurtured by his family. “My mom is very interested in the wider world and [my parents] always took us on trips when they could,” he adds. “My dad was in the Navy as a young man and he got to travel all around the world. My bedtime stories would be stories from his travels throughout the Mediterranean and other places, so [my parents] certainly did encourage that.”

During graduate school, Mr. Rowell completed an overseas exchange program in Europe, where he met another kindred spirit that would kindle his passion for exploring the world beyond our borders: his fiancee Claire. “We both had that interest in potentially having an overseas life and career,” he says. “Claire has always been super supportive [and encouraged] me to study and prepare for the exam that I had to take.”

Mr. Rowell and his fiancee both applied for jobs with the Foreign Service out of graduate school, but neither one of them was selected. After teaching at Blake for four-and-a-half years, Mr. Rowell decided it was time to try his hand at the lengthy application process again, and this time, he was selected.

From start to finish, including background checks, the application process can take around two years to complete and some conditional offers do not ever mature into official offers of employment. This time around, Mr. Rowell feels he was successful primarily because of the teaching experience he gained since the first time he applied.

When he applied for a position at the Foreign Service out of graduate school, the most notable relevant professional experience he had was working at a European affairs think tank in France. Even though that position helped Mr. Rowell navigate the professional world and a new culture, he says teaching is what really gave him what it took to be hired. “[The] essays are asking about times you’ve shown certain aptitudes,” Mr. Rowell explains. “These are the 13 dimensions … of a successful [FSO]. But people often talk about the 14th dimension, which is persistence. I think in one way, I was able to develop [these abilities] through teaching because I think teaching is one of the most dynamic and challenging jobs you can have. You’re constantly solving problems, you’re interfacing with 150 people a day and working to help them get the best outcome.”

Many of the details regarding Mr. Rowell’s next steps remain uncertain. Right now, he knows he is on the Consular Officer track. This means he will be working in the American embassy of wherever he is stationed, processing visas, conducting visa interviews for foreign nationals who want to work or travel in the US and making sure Americans in trouble abroad have access to help like legal resources.

Currently, Mr. Rowell does not know where he will be doing this consular work. Eventually, he will be given a list of countries and will rank his preference for a post in groups of thirds. He hopes to be assigned to a Spanish-speaking country in the Western Hemisphere because his fiancee works with Spanish-speaking clients in this portion of the world and Mr. Rowell wants her to be able to keep her job for the time being. Given his background in and knowledge of French, however, he wishes to eventually be stationed in a Francophone nation.

Mr. Rowell not yet being married poses a unique challenge. He was supposed to be married last summer, and then the pandemic upset his wedding plans. However, if Mr. Rowell’s fiancee does not become his wife before he must leave for his post, she cannot travel with him according to State Department regulations. Mr. Rowell says he will either have to have a courthouse wedding if he is sent away before their rescheduled wedding date, or will have to leave and then come back to be married. Some posts, though, have been deemed too dangerous for family accompaniments.

The life of an FSO can be exciting, but also challenging and, quite frankly, dangerous. “Even though as an [FSO], you’re going to have some of the best living conditions of what anyone might have in a given country, you won’t have the comforts of home,” Mr. Rowell says. “It’s not always necessarily safe for you to travel [and] it might be difficult to follow a fitness routine you’re used to. I think, for me, a bigger [challenge] would be that for both myself and Claire, we’ll be away from our families and we love our families a lot. Our life probably won’t be as comfortable or convenient as it has been here, but I’m excited about the advantages and I think they definitely outweigh the disadvantages.”

Something else Mr. Rowell may struggle with is having to represent the policy interests of an administration he doesn’t necessarily agree with, especially in such polarized and divisive times. “It’s something that I struggled with because I certainly don’t agree necessarily with all of American foreign policy positions,” he says. “I think you don’t want  [FSOs] who are just ‘Yes people’ because then you don’t get any feedback. At the end of the day … I think on balance, US foreign policy has been a force for good in this world.”

For students who want to pursue a job within the Foreign Service or State Department in general, Mr. Rowell advises looking into State Department summer internships soon, as deadlines are fast-approaching, He also recommends the Critical Language Scholarship Program and the Foreign Language Area Study Program in college. Students who want to ask more questions of Mr. Rowell or simply keep in touch with him can contact him at brendanjrowell@gmail.com. Mr. Rowell will be on Zoom from 2:30 to 3:00 PM Friday afternoon in case anybody would like to drop in to say hello and goodbye. The Zoom link is: https://mcpsmd.zoom.us/j/3582790674?pwd=K1F2bjEyTHZqNXFxVFk1WjdjMTVGQT09). The password is 1234.

Through his roles as teacher, club co-sponsor, and coach, Mr. Rowell has positively impacted so many members of the Blake community. Many students echo that they will miss Mr. Rowell’s presence after he leaves.

Student and Model UN participant Theo Sodani says, “He was the teacher at my freshman open house that really sold Blake for me and made it feel like my next home away from home. Also, the several car rides with him for Model UN that he gave us and the tours of Washington, D.C. were insanely fun and educational. I’m going to miss his presence, but I wish him the best in the Foreign Service.”

Deena Habash, another Model UN participant adds, “Mr. Rowell is the kindest and most involved teacher I have ever had. I’ll miss him getting excited about little things and sharing them with us, like a cute animal he saw or a good joke he heard. I’m really going to miss his presence at Blake but … I wish him all the luck and happiness he can find in his new job.”

Student and Model UN member Letsky Clermont shares, “Even having multiple classes at multiple grade levels, Rowell still made the time to aid me individually. He made my high school experience enjoyable. He will be missed.”

Social Studies Department Head Jeffrey Newby adds, “We will miss Mr. Rowell.  He has been an integral part of our school and the Social Studies Department for the last four-and-a-half years. It’s hard to imagine Blake without him. I worked with him closely on the AP World History team. His enthusiasm and commitment to students always impressed me. We are excited for him and wishing him the best.”

Personally, my favorite memory with Mr. Rowell was running along the beach with him, a couple other teachers, and another student in Spain while he was blasting Carly Rae Jepsen from his phone.

I think it’s safe to say that if you’ve ever interacted with Mr. Rowell, he’s made you laugh, he’s taught you something from a cool fact about a country to a profound life lesson, and he’s inspired you.

Go forth and be great, Mr. Rowell. We will miss you. 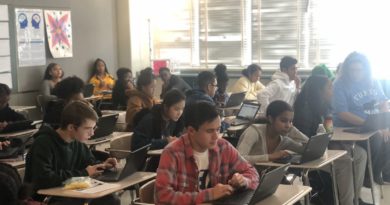